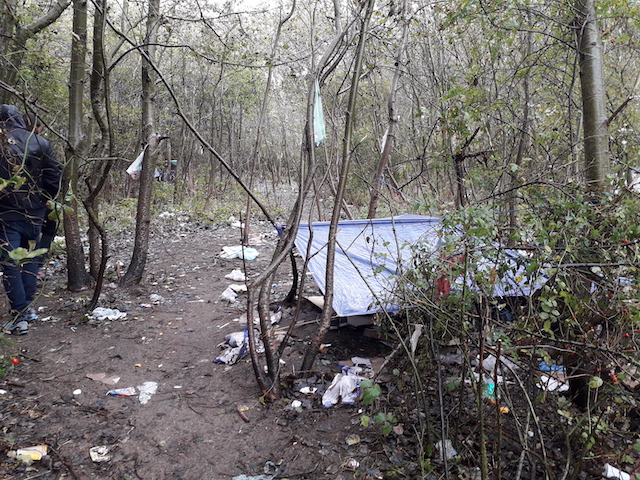 Displaced unaccompanied children in Calais are faced with multiple crises including poor living conditions in makeshift camps, daily or weekly evictions, health hazards, insufficient access to vital services and police violence. It is because of this protracted crisis and the increased evictions happening this summer that Refugee Youth Service (RYS), alongside other associations on the ground, submitted a referral to Claire Hédon, the défenseure des droits (DDD)* in France. The document outlines the increasingly alarming situation faced by unaccompanied children in Calais, which prompted a two-day visit and assessment of the situation from the DDD.
‍

On 22 September 2020, Refugee Youth Service welcomed Claire Hédon, défenseure des droits, who was joined by a team of seven experts specialising in child protection, law enforcement deontology and Migration Law. The RYS team was represented by our social worker and cultural mediator.
‍

For the first day’s visit, RYS had scheduled visits to 3 makeshift camps and areas in Calais where the displaced and refugee populations live. Other organisations present during the sites’ visit were representatives from Utopia 56 and Centre National de la Recherche Scientifique (CNRS) - whose presence was very important in supporting with Arabic language interpreting.

Throughout the day, we shared our experience and knowledge about the changes that we have noticed following the different evictions taking place over the summer and their impact on people's movement and human rights. We also briefed the visiting team on the precarious living conditions within the camps and the long distances that displaced people had to make to access vital services. We mentioned that the location of the sites keeps changing due to the evictions which in addition complicates food distribution and protection activities. The DDD showed specific interest in knowing the consequences faced by unaccompanied children.

Consequently, the DDD managed to speak to a child currently living in one of the sites who shared his difficult experience with the French asylum system since his arrival in France. He also showed the precarious and unsanitary living conditions in the informal settlement where he currently resided.

Claire Hédon and her team were also able to speak to a small group of people living in another makeshift camp. People talked about their experience with the reoccurring police violence and evictions they faced. The DDD also spoke to families with children whose asylum requests were denied. She was also let inside makeshift spaces to assess the overall situation, including the water distribution points, showers and toilet facilities.
‍

In the afternoon, the DDD and her team joined other** non-governmental organisations who were gathered at the Secours Catholique office in Calais. During this meeting, the RYS social worker presented as thoroughly as possible information familiarising the DDD and her team with the different informal settlements in Calais. Other organisations also discussed their work and observations within the sites.

Afterwards, the DDD continued with the sites’ visits but this time her team was split into two groups in order to facilitate more interactions with the children and gain better understanding of the situation they are continuously facing. The DDD, herself, joined the RYS’ team who briefed her on the lack of protection mechanisms for unaccompanied children, specifically in regards to human trafficking, the absence of mechanisms to help victims of such and the lack of answer from authorities. Our cultural mediator also highlighted the problem of sexual exploitation happening in the camps and the dangers of this for vulnerable children. Another problem that was discussed with the DDD was the health hazard facing children including the dangers of other diseases in addition to COVID-19 such as tuberculosis, which exists in these camps.

During the last site visit, the DDD also witnessed first hand the important role that RYS played in supporting vulnerable children as well as the importance of building relationships and trust between RYS and the unaccompanied children especially for their access to the child protection system in France.

After the day was over, the DDD expressed her interest in learning more on how the CRS police treat displaced people and refugees. She also promised to keep up-to-date with the State Council’s decision regarding the ban on food distribution in certain areas in Calais;

Following their two-day visit to Calais, the DDD developed a situation analysis report on the living conditions for displaced people and unaccompanied children with specific recommendations, which can be found in detail here.

The report highlights the degrading living conditions and asks the State for an urgent solution to this worrisome and frequently neglected crisis.

In the situation analysis report, the DDD expresses her concern particularly regarding women and children who are especially vulnerable to becoming victims of sexual exploitation and violence. Among the key recommendations were opening an easily accessible day centre for the unaccompanied children, which is imperative to respecting their rights, ensuring their safety as well as living up to France’s commitment to the International Convention on the Rights of the Child. In relation to the process of reuniting unaccompanied children with their relatives in the United Kingdom, the DDD reiterates the importance of having an efficient legal process in order to prevent children from taking life-endangering journeys across the Channel by small boats. The DDD urges the authorities to work on opening legal and safer routes, as well as to treat people on the move with the respect and dignity that they deserve.

* Défenseur des Droit (DDD) or the “Rights Defender” is an independent administrative authority in France, appointed by the president of the republic. The DDD is responsible for defending the rights of citizens not only vis-a-vis as an Ombudsman but also has specific role in terms of promoting human rights, children’s rights, fight against discrimination and respect for ethics in security activities.